Home → News → What are the difficulties in separation of feldspar and quartz fluoride-free flotation? How to solve

What are the difficulties in separation of feldspar and quartz fluoride-free flotation? How to solve

Quartz and feldspar are both silicate minerals with a frame-like structure, which are similar in physical and chemical properties, such as non-magnetic and close in density. Currently, flotation is mainly used for separation. Although the hydrofluoric acid method can separate quartz and feldspar better, because of the serious pollution of the environment and equipment by HF, the current research and application is more fluorine-free flotation. 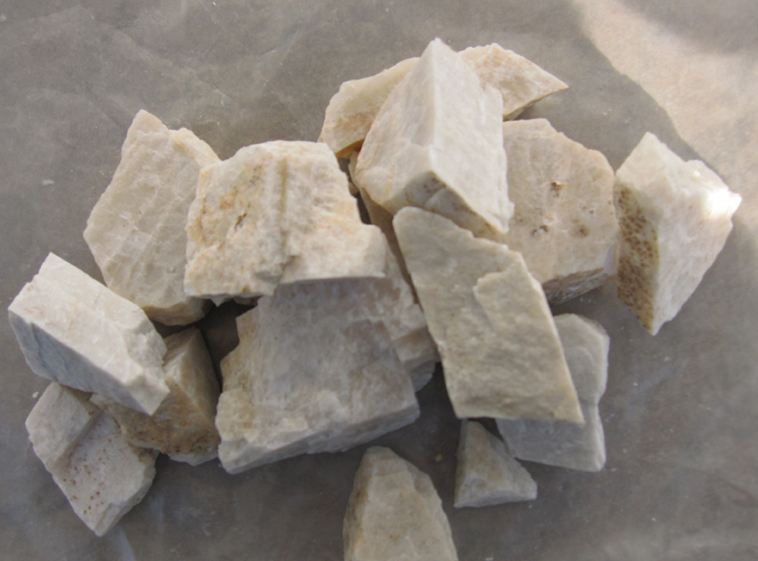 1. Difficulties in separation of feldspar and quartz fluoride-free flotation

(1) Fluoride-free acid method
The basic principle of the fluorine-free acid method is that the anion-cation mixed collector and the electrically neutral quartz surface under strong acidic conditions can only form weak electrostatic adsorption and molecular adsorption, and the negatively charged feldspar The Al3+ on the surface forms characteristic adsorption, while the K+ and Na+ used to balance the valence in the feldspar lattice form positively charged voids on the surface to form electrostatic adsorption and molecular adsorption on the cation collector. These three adsorption effects make the long The adsorption amount of the collector on the stone surface is larger than that on the quartz surface, so feldspar surface preferentially floats.

(2) Fluoride-free and acid-free method
The fluorine-free and acid-free method is generally to separate the quartz and feldspar by adding an anion-cation mixed collector under neutral conditions. Common collectors are amine and sodium petroleum sulfonate. The basic principle is that under neutral conditions, the surfaces of quartz and feldspar are negatively charged. The collector has electrostatic adsorption on both surfaces, but only on the surface of feldspar. Due to the presence of Al3+, characteristic adsorption will be formed. When the concentration of the anion and cation mixed collector is appropriate, supplemented by a unique process such as high-concentration slurry adjustment, this adsorption will be accelerated, and a layer of insoluble will eventually form on the surface of the feldspar The hydrophobic membrane makes the feldspar surface change from hydrophilic to affinity, and it is easy to float out. For quartz, the electrostatic adsorption of the collector on its surface will also gradually decrease as the slurry is adjusted, so that feldspar will float out in preference to quartz.


2. How is the effect of separation of feldspar and quartz fluoride-free flotation?

(1) Adjust the pH of the pulp
Adjusting the pH value of the pulp is mainly to adjust the H+ or OH- concentration in the pulp solution.
Acidic conditions: when the pH of the solution is 2-3, the surface of the feldspar is negatively charged and the surface of the quartz is neutral. The positively charged amine cations will preferentially adsorb to the negatively charged region of the feldspar surface, and the other end will be collected with anions Agent complexation, these complexes have higher surface activity, will greatly enhance the surface hydrophobicity of feldspar, making feldspar float, when the molar ratio of anion and cation collector is less than 1, it is conducive to the hydrophobic float of minerals .

There are three main functions between feldspar and oleate ions, that is, Al3+ and oleate ions produce chemical adsorption to produce aluminum oleate, electrostatic adsorption, hydrogen bonding or molecular adsorption. Although these three kinds of adsorption are very powerful, they still have Can not cause a large amount of feldspar to float up. At this time, if an amine cationic collector is added, it can adsorb with oleate ions to form a complex similar to aluminum fluoride, so that the amine collector is firmly adsorbed on the feldspar for separation Quartz and feldspar.

Alkaline conditions: Under the condition of pH=11-12, sodium alkyl sulfonate is used as the collector and alkaline earth metal ions are used as the activator, and quartz can be preferentially floated. Ionic surfactants can dramatically increase the recovery rate of quartz and have little effect on feldspar. The basic principle is that metal cations and sodium alkylsulfonate can form neutral complexes, and these complexes are combined with free sulfonate ions to be adsorbed on the surface of quartz together, which has the function of a semi-micellar accelerator, making Quartz floats up. Under high alkali conditions, the amount of alkali metal ions increases, which is higher than the content of alkali metal ions in the acidic solution. Therefore, under high alkali conditions, it is not conducive to the adsorption of external metal cations.


(2) Change the type of collector

Under different pH conditions, the collector used is also different.

Under acidic conditions, there are few studies on the positive flotation of quartz, mainly considering that the zero electric point of feldspar is about 1.5, and near the zero electric point of quartz pH=2-3, the quartz is not charged, and the surface of the feldspar is charged. It is negatively charged, so under this pH value, feldspar is more likely to be preferentially floated out. The collectors used for preferential flotation of quartz are dodecyl diamine and cetyl ether polyoxyethylene.

The study of the types of quartz feldspar collectors shows that a single cationic collector cannot effectively separate quartz and feldspar under fluorine-free conditions, or the effect is very poor, so the collectors used are mostly anionic and cationic combination collectors. Mainly.

(3) Change the type of inhibitor and activator
The main purpose of adding inhibitors in mineral processing is to desorb the agent that has been adsorbed on the surface of the mineral, or to prevent the collector from adsorbing to the surface of the mineral. Commonly used to inhibit quartz are sodium hexametaphosphate and water glass, the latter also has a dispersant effect.

Adding metal cations to the solution can improve the floatability of feldspar and quartz. When quartz and feldspar are activated by Cu2+, Ca2+, and Pb3+, when sodium oleate is used as the collector, quartz has the weakest adsorption capacity for Cu2+, but it is slightly better than Pb3+, and the adsorption capacity for Ca2+ is better than that of Cu2+, Pb3+ is good, and the best floatability of quartz activated by these three ions is Ca2+. This is because Cu2+, Ca2+, and Pb3+ mostly exist as octahedral hydroxy complexes in aqueous solution, which is more stable and covalently connected to other polyhedrons. The quartz surface has a large number of bridging oxygen and Si-O- functional groups. The metal ions are combined by the common angle top, so the force is weak, which is the main reason why the adsorption capacity of quartz for these three ions is not very good. The Cu2+ and Ca2+ adsorbed on the quartz surface are completely exposed, and the binding force of the remaining bond valence to oleate is greater than that of the metal ion to the quartz surface, which is why quartz can be activated by Cu2+ and Ca2+. . The law of adsorption and activation of these three ions by feldspar is similar to quartz, but the effect is not as good as quartz, especially under the activation of copper ions

(4) Surface pretreatment
During the grinding process, part of the slime, especially feldspar, will be easily sludged as the particle size becomes smaller. This part of the slime has a very fine particle size and a large specific surface energy. It will preferentially collect with the collector during the flotation process. The molecular action increases the consumption of the collector, resulting in poor flotation.

For ores that contain trace amounts of carbonate, Ca2+ and Mg2+ will be dissolved in acidic medium. These ions weaken the positive charge holes on the feldspar surface to the electrostatic adsorption and molecular adsorption of the collector, which ultimately affects the long Priority flotation of stone. Some ores contain other minerals, such as mica, which is often associated with feldspar quartz, or the surface of the feldspar is weathered or wrapped by an iron oxide film. After removing these minerals, the surface of the ore sample will be contaminated with chemicals. Therefore, Before the flotation separation of this feldspar and quartz, some pretreatment should be carried out, such as desilting, scrubbing, acid leaching, etc. Common desilting include sedimentation and flotation.

(5) Other influences
Studies have shown that when the content of feldspar and quartz is different, which kind of agent or process should be used for flotation separation, this may be one of the reasons why non-metallic ores are more difficult to select than ordinary iron minerals, such as a small amount of feldspar Purification of quartz, purification of feldspar containing a small amount of quartz, flotation separation when the content of the two is equal, etc.

Other factors such as whether the feldspar is mica, the weathering degree of the feldspar, the particle size and the state of the inlay, whether the raw ore contains clay minerals, etc. Pre-processing etc. have a certain impact.

The effective separation of feldspar and quartz from fluorine-free flotation is the future development direction of feldspar and quartz separation technology, especially the flotation under the condition of fluorine-free and acid-free. There are many problems that need to be solved, such as looking for enhanced Al3+ activity on The strong binding ability of the medicament, various studies to promote the adsorption of the feldspar surface and the medicament, etc. Through these studies, we can fundamentally solve the current situation in which feldspar and quartz can not be separated without acid and incomplete separation, which will greatly improve The added value of feldspar mines and quartz mines in China, while protecting sorting equipment and mine environment, has the effect of three birds with one stone.
Related News